Edgar from the Brawl Stars is an assassin of epic rarity. He fights with his scarf, is extremely agile an is considered to be one of the most powerful brawlers. In this article, you’ll find his exhaustive profile.

Who Is Edgar from the Brawl Stars?

He is known as “the subtlest assassin of the Brawl Stars”. Some players suspect he might be a sibling of either Colette or Bibi.

He is good at diving throwers and sharpshooters. He is highly efficient in one-on-one combats but should avoid group battles. He would be no good against a trio. The toughest enemies for him are brawlers with high health.

The voice actor for the character is Scott William. One of the most famous phrases he says is “CEO of Brawl Stars!”.

The Looks of Edgar

His appearance seems to be inspired by the emo subculture. His long black hair is combed into a side parting so you can see only his right eye while the left one is covered with the fringe. The signature striped scarf that Edgar fights with covers his mouth. He wears dark casual trousers, street-style boots, a T-shirt with a pop of bright red, a studded belt and fingerless gloves. His nails are painted black. 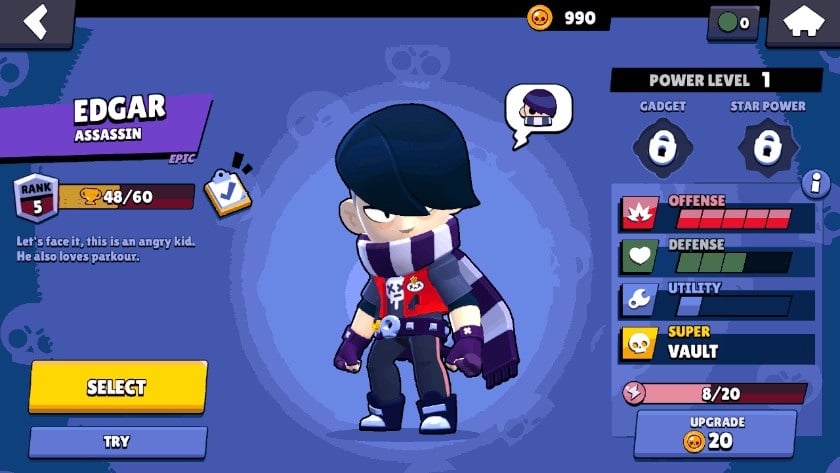 How to Get Edgar in Brawl Stars

From 19/12/20 till 7/1/21, you could get this Brawl Stars hero for free. Today, you won’t be able to unlock him via your trophy progress. Still, you have a less than 1% chance of finding him when you open a Brawl box.

How to Play Edgar in Brawl Stars

Edgar’s Super is a quick jump over obstacles. It guarantees a speed boost upon landing. The Trait enables the Super to gradually charge itself.

During an attack, the character throws out two short-range punches that help him to get rid of 25% of the damage. To deal maximum damage to the enemy, he needs to get as close to him as possible.

Vault can launch Edgar into the air. He lands a short distance away and gets a movement speed buff for 2.5 seconds. Over time, Vault will charge passively.

The Let’s Fly gadget accelerates the process of passively charging the Super. The rate increase lasts for 3 seconds. The charge can reach 26.4% from the base recharge of 3.3% per second.

The Hardcore gadget creates a shield to absorb damage. The shield gradually decays.

As for the Star Power, Hard Landing adds damage to Vault when Edgar lands. It results in 1000 damage as well as damages enemies in a 3 tile radius.

Another Star Power, Fisticuffs, raises the amount the character heals per punch.

The best partner for this brawler should be Byron or some other healer. Thanks to them, Edgar gets higher chances of defeating the enemy without dying himself.

Edgar Against Other Brawlers

Here are a few ideas of which tactics you might want to use when Edgar combats against other Brawl Star characters:

When one Edgar counters another, they should either auto-aim their Super or distance from the enemy while attacking to extend the attack’s range.

Apart from the default icon, Edgar from Brawl Stars is also available in three additional skins.

It looks like a traditional Mexican costume with a sombrero, a poncho and of course the scarf. The color scheme of the outfit is based on various shades of red and green. Under the poncho, you can see a dark belt decorated with golden rivets. All the items look very conventional. There is not a single accessory that could hint at the brawler’s superpowers. The skin was added on 07/5/21 and costs 79 gems. 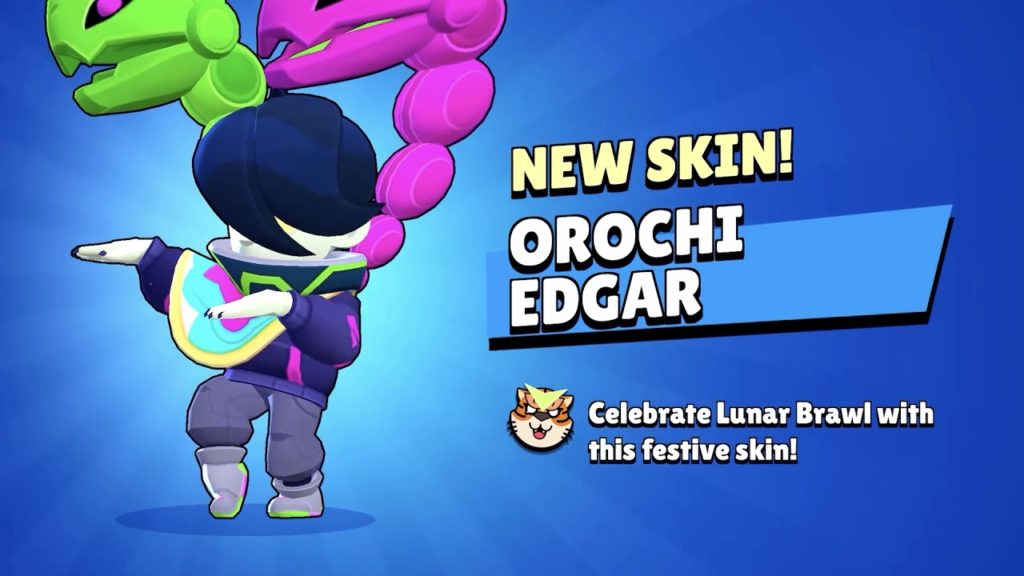 With this skin, Edgar’s scarf turns into two large snakes. The one behind his right arm is green with purple eyes. The other snake is purple with green eyes. The character’s hair turns dark blue, his eyes turn yellow and his nails are painted dark blue. He is wearing a dark blue sweater, grayish-bluish trousers and gray boots. The skin was added on 26/1/21 and was featured as a Year of the Tiger skin. It costs 149 gems. 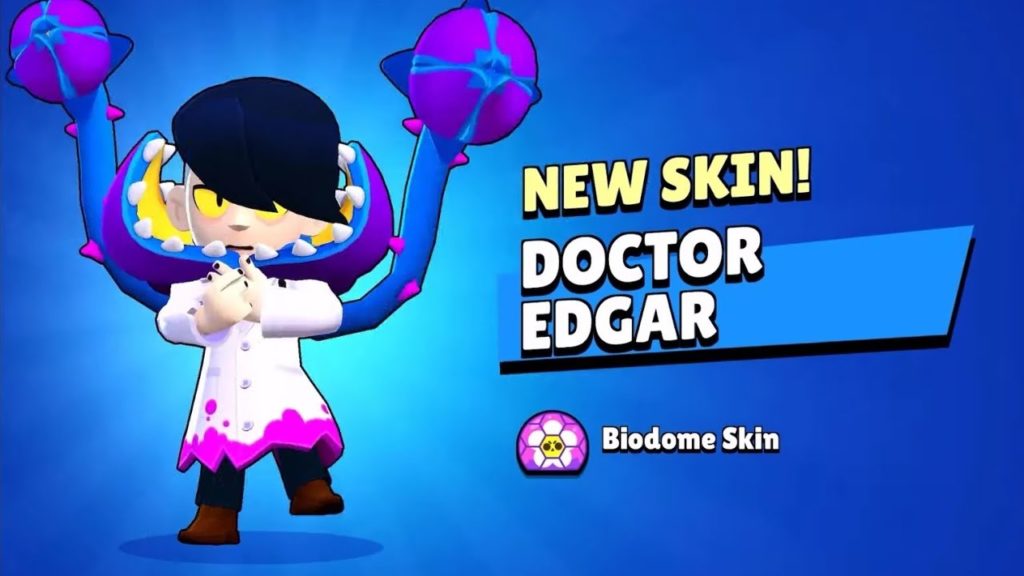 The character is wearing black formal trousers, brown formal leather boots and a medical overall whose hem is splattered with a purple liquid (it seems to be blood). There is a doctor’s badge on his chest and a black pen in his top pocket. Edgar’s eyes are closed and his head is trapped into a large blue sundew flower bud. His scarf has turned into two flowers that look like predators. There are white teeth and purple spikes all over the plants. The price of the skin is 149 gems.

Pins were used to create the last two skins.