Besides his excellent health and powerful damage at close distances, Leon Brawl Stars has four Spinner Blades to strike with, which become weaker at long range, though. Genetically, he is Nita’s cousin and Bo’s nephew. His Gadgets and Star Powers help Leon clone himself, make himself and his team invisible, boost his speed and heal himself when his Super Power is on.

Who is Leon from Brawl Stars

Leon comes from an Indian tribe, and like a true Indian warrior, he can command all animal powers. He disguises himself like a chameleon, strikes like a wolf, bites like a shark, yet remains a real cute duckling through and through.

Always hiding his face under his hood, Leon appears as a chameleon by default. Later, you can turn him into various animals, like a shark, duck or wolf. 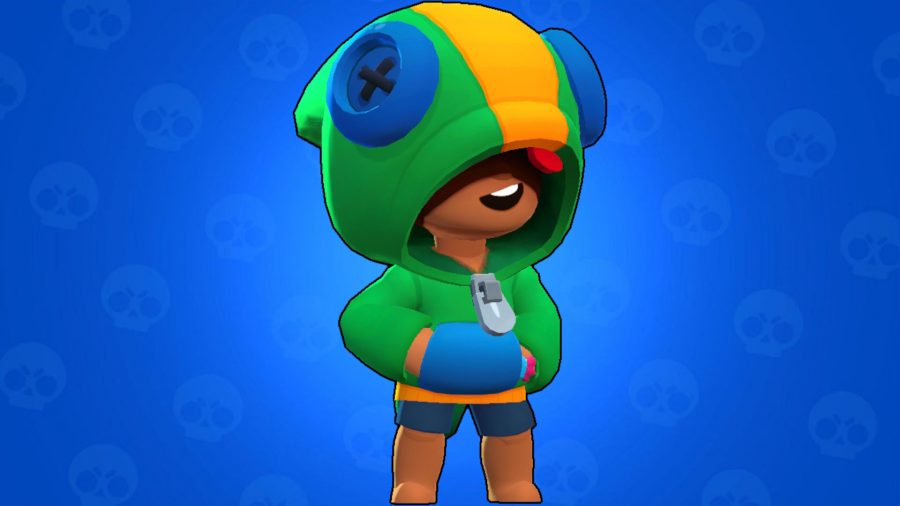 Brawler Leon is now three years old. The list below shows the most significant events in his biography.

Enemies could now spot him from four tiles away during his Super attack.

The duration of his Super attack went down to seven seconds. His attack projectiles changed their texture.

The brawler lost his invisibility in Super attacks against IKE turrets.

His healing power went up to 1,000 per second. The duration of his Super attack went down to six seconds. Leon received his voice lines.

He received a Werewolf skin, featured as Brawl-o-Ween.

He received a Sally skin, featured as Line Friends.

The damage to his standard attack went up from 103 to 178 at maximum range.

The damage to his standard attack went up to 186 at maximum range and back to 460 at minimum range. Leon’s Clone Projector ceased to disappear with a single hit, to get a double damage instead. He received a True Silver and True Gold skins.

In the absence of enemies, the brawler’s Clone Projector began to return to him.

Leon acquired the Smoke Trail’s Star Power. The boost of his movement speed in the Super attack went up from 24% to 30%. When spawning a clone, his Projector Gadget began to mimic his Super attack instead of the standard one.

He received a Lollipop Drop Gadget.

When his Lollipop Drop is deployed, its health begins to deteriorate until it dissipates completely. Leon Brawl Stars has been moved from Stealthy Assassins to Assassins.

How to Get Leon

You can either buy Leon from the Brawl Shop for 550-700 gems or get him from a brawl box, with an average chance of 1 in 120. But if you test your characters and open the boxes in batches of three straight after each test, you will increase your chances to 4 out of 5.

How to Use Leon in Brawl Stars

Move around the battlefield

The best strategy is to be on the move constantly. Leon plays best when he is moving around, attacking weak and low-health enemies at minimum range. You can use his Super Power to turn invisible.

Locate the enemies with Clone Projector

If you activate the gadget, it will direct you to the nearest enemy automatically. But it will cause more damage too, so make sure to use the gadget before it dies.

Stay near the enemies

Leon from Brawl Stars is most destructive to his enemies at close range. You can easily sneak up on them by using his Super Power or by hiding behind objects.

Control the battlefield with Lollipop Drop

This gadget turns all of Leon’s allies within his shooting range invisible, and it works best when concealed behind objects. Use Lollipop Drop to make Sharpshooters and Throwers happy team members.

Leon’s Super Power will heal him if Inivisiheal is on, until the former expires, or he starts attacking.

Smoke Trails boosts his movement speed when he is using his Super Power.

Leon vs Other Brawlers from Brawl Stars

Leon fights well with some brawlers in Brawl Stars, yet some are absolutely deadly for him.

His heath is quite low, and Leon can kill him with a single blow.

The same applies to Dynamike, but stay away from his attacks and never run in a straight line.

This one can be extremely dangerous at close range. Be alert when coming near him, or hide behind objects.

Being stronger yet slower than Leon, El Primo is best attacked from a distance.

She is helpless by herself, so try to isolate her from her team first.

Leon is much faster than Penny, and her shots are easy to dodge, but try to kill her before she draws her gun.

Beware of any sniper’s deadly damage. However, they take their time to reload, and that is when they become easy prey at close range.

Do not let him get come close to you, or you may be dead in a second. Drawing his attention and making him run after you will work much better.

All Leon skins in Brawl Stars